The needs of armed forces personnel continue to grow in the increasingly highly pressured military environment and with it, the demands on SSAFA’s resources, systems and processes. SSAFA had identified that their ageing IT systems were due a much-needed overhaul and SSAFA knew that the problem was a massive one to solve.

SSAFA needed to invest in a solution that was affordable, scalable, fully integrated, and supported from beginning to end by a company who understood their issues.

A system review tender was put out to see what technologies companies would recommend and how these technologies could help SSAFA with their business goals.

SSAFA needed the new system to have a much smaller footprint than the existing legacy systems, with office space being at such a premium in central London.

The businesses need to act fast to tender opportunities and needed flexible IT systems that could quickly do “proof of concept” for any new requirements. This had always been a rush to purchase and install hardware at a large capital outlay and for a project that may never reach production.

Business Continuity and Security were also high on the list of priorities. Rapid availability in the event of a disaster was deemed crucial and due to the highly private data they process, IT Security needed to be really high

“We have been delighted with the level of service we received from InfoTech and look forward to the cost savings this will bring us. ”

Working in association with world-class vendors and distributors – Hewlett Packard, Microsoft, SonicWall and Tech data – and SSAFA themselves, InfoTech drew up an innovative solution using the very last in technology that ticked every box. The solution delivered server performance in efficient, high density, easy to expand and easy to manage units which saved space, energy and maintenance as well as providing optimum scalability, stability, efficiency and flexibility.

The first task was to use HP Blade Server technology to consolidate the 18 traditional servers, which were spread across three racks, into one rack consisting of 11 HP Blade servers. Relatively inexpensive to install, the HP4500 Blade System SAN with its disk (D2D) back up now offered SSAFA a wire once, change-ready Converged infrastructure that was optimally sized and engineered for their needs.

The end result for SSAFA was too fulfill their goals and overcome their challenges faced such as:

SSAFA were delighted with the outcome of the project, their goals were fully met and challenges were overcome allowing them to move forward as a business with an IT System that really supported them.

They didn’t have to worry about any future projects that may occur because they now have the right systems to be flexible at a moments notice.

“Not only are we more efficient since using InfoTech as an organisation but we are reducing our carbon footprint too.”

“InfoTech delivered a system that fulfilled our expectations and did so in a very professional manner, their engineers were on hand to answer questions and nothing was ever too much trouble. ”

SSAFA are the longest serving national tri-service military charity. For 130 years, they have provided lifelong support to those who are serving or have ever served in our Armed Forces. Providing welfare advice and support, health and social care services, specialist services, services for children and housing.

SSAFA works in partnership with other military charities and specialist organisations to ensure that those who turn to them for help get the support they need.

SSAFA put Armed Forces families at the heart of everything they do.

SSAFA have up to 81 different sites the UK and have around 600 dedicated employees. 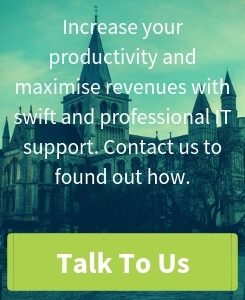 The Best Cloud Service for SMBs? For Many, It's the Public Cloud

What is the best Cloud service for SMBs? Some businesses have found that the public cloud is their preferred way of handling the management of critical systems.

What it’s Like to Have Your IT Support Company Go the Extra Mile?

Why the DIY approach to IT Support isn't the best option for your business. IT is like any service you deserve service that is willing to go the extra mile.

8 Facts About Cyber Security Bound to Scare Your Business

Lots of businesses are worrying about cyber security. Attacks are becoming more common and causing more damage. Here are 8 scary facts from a recent report.